It was a privilege to work for Digital Equipment Corporation in the mid-80’s while it experienced phenomenal growth. Its’ technology was incredible and everyone who worked there believed in it. The VAX/VMS was an amazing computer that could span from a PC to a mainframe without changing operating systems. For the non-techy types, the Virtual Address Extension/VAX was a multi-user computer system. DEC, as we were known became famous for the mini-computer. When we came out with the MicroVAX, IBM – one of our main competitors – actually introduced their own version, “the VAX killer.” The soaring stock price of DEC was evidence of our success.

We didn’t know it at the time, but we were creating a blue ocean – we made our competition irrelevant. 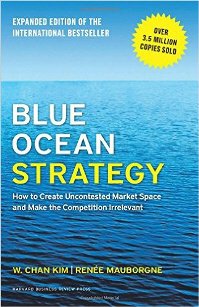 It’s been out a while, but I highly recommend the book Blue Ocean Strategy by W. Chan Kim and Renee Mauborgne that focuses on making your competition irrelevant. Wouldn’t that be nice! “Blue ocean strategy challenges companies to break out of the red ocean of bloody competition by creating uncontested market space that makes the competition irrelevant. Instead of dividing up existing-and often shrinking demand and bench-marking competitors, Blue Ocean is about growing demand and breaking away from the competition.”

So how can you create your own Blue Ocean strategy and set yourself apart from your competition. Every year it is tougher to beat the competition in a heads on battle. Instead, the best strategy is to break away and create a new market where no one else exists.

Kim and Mauborgne reveal their Four Actions Framework to create a new offering that has new value. This framework includes the following steps:
Reduce- which factors should be reduced well below the industry’s standard?

Using this framework leads to a new value curve. What can your company do to create value that has never been offered before? It takes three characteristics: focus, divergence and a compelling tagline.

One great example of this is Southwest Airlines.

They focus on three benefits: friendly service, speed, and frequent point to point departures. By doing this they are able to price competitively against car transportation because they don’t invest in meals, lounges and seating choices. They have a much more efficient business model than the traditional airline companies.

Southwest also diverges – they don’t focus on competition. Instead, they pioneered point-to-point travel between mid-size cities; previously, the industry operated through hub-and–spoke systems.

And, Southwest had a compelling tagline: “The speed of a plane at the price of a car-whenever you need it.” Later they used the tagline “fun fares” and trust me they are fun.

“Ladies and gentlemen just in case of a drop in cabin pressure yellow margarine cups will come out of the ceiling. Put it on and breathe normal!” Yea right! I was recently on a Southwest plane and I wish I had recorded the five minute comedy act the flight attendant gave. Even from the middle seat, this entertainment was worth the trip.

What can your company do to break away from the competition? What can you eliminate, reduce, raise and create? Remember that the more value you deliver, the more market share you can capture.